Dom is a very pretty boy. He is a dark skinned Ultimarian with a broad face, high cheekbomes and a slightly flattened nose. His eyes are a brilliant golden color (which isn't unusual for his species, even a dark skinned variety).

His hair is a "mane" of semi-thick dreadlocks that sweep backwards. He also has a small soulpatch goatee on his chin.

His body is well muscled and athletic with well defined torso and arms. He has two tattoos, a tribal marking on his right bicep and a tribal bird with outstretched wings that spans his upper back between the shoulderblades.

When dressed for work, he wears a black t-shirt, olive green or khaki pants and a pair of black leather boots. A leather bandolier is worn to stap a gun to his back when it's not in use. His casual clothes include a t-shirt (or long sleeved tee when it's cold), a pair of jeans, and a t-shirt.

He carries around a military grade rifle that he's modified to make even more accurate. He also has a pair of black leather gogles with yellow "alien" lenses. The goggles are one of Shae's inventions. They actually display target information to make his shots even more accurate. 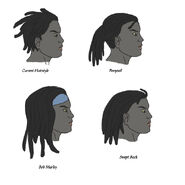 His heart is in the right place,
but sometimes he tends to be hot
headed and insensitive without
realizing it. He is very loyal and
generous towards his friends.

Dom is the childhood friend of Aredon's older brother Kyjja. As children, the
two boys were nearly inseperable and would often get into mischief together,
causing major headaches for their parents. As teenagers, Kyjja and Dom
still hung out together and were "drinking buddies".
Dom entered the Imperial Navy four years before Aredon, where his superiors recognized
his uncanny abilities with a rifle.
When the time came for Aredon to jointhe Navy,
he was assigned to the same Unit that Dom was a part of.
Kyjja told Dom to watch over his little brother, which he did. Dom was the one who
helped Aredon through his early training and became a very close friend.
When Aredon founded the Impiral Suns, Dom was the first person he asked to join.
The first battle the Suns ever fought as a team, Dom sustained a blaster
wound to the stomach, but Nazari was able to save his life.
After his recovery, he has a different outlook on life and sees himself as
part of a group that is greater then himself. He is proud to be a Sun
and would give his life for any of his brothers at arms.

Dom is one of two riflemen for the
Suns. Trent being the other.
To be more specific, Dom specializes as
a "long rifleman", meaning that he
acts as a sniper. He effectively expands
the Sun's fire range with his
long range rifles. He can take
out a small target from about four
miles away if he's wearing his goggles,
using his best rifle, and has perfect
weather conditions.

Relationships with Other Characters

Community content is available under CC-BY-SA unless otherwise noted.