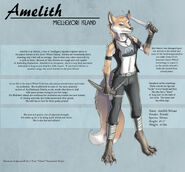 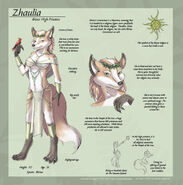 Seeking the Guidance of the Lifestream.
Add a photo to this gallery

Highly religious vulpine humanoids from the arboreal planet, Ibirius. Ibirians are remarkably tiny. Other races have tried to pick on Iberians because of their small size. Pirates and bandits see them as easy pickings. Because of this, Iberians have become well adapted to take care of themselves. The way an Ibirian will interact with you depends on how you treat it. If you approace an Ibirian in a fiendly manner then they will be helpful and polite towards you. If you approach it with hostility, then it will be defensive and violent towards you.

Short and physically weak, Ibirians are often picked on by the larger races. They are three feet tall and weight 35-40 lbs. They resemble anthropomorphic red foxes with fur a reddish brown color and white undersides and dark brown “socks” and ears. The exact markings and fur tones can vary by individuals. They do not have “hair”, but the back of their necks have longer, shaggier fur that give a manelike appearance. The mane is the same color as the body fur, but ends in white tips. The eyes of an ibirian are always yellow or orange. As anthropomorphic foxes, of course they have big poofy fox tails. Ibirians with the largest tails are often “sexier” to the opposite gender.

Like their vulpine ancestors, Ibirians are level headed and intelligent. If threatened, they would rather run or talk their way out of the situation then fight, but if forced to fight they can be a formidable foe. They still retain their hunting instincts and will form hunting parties for small animals and birds either on their homeworld or on other worlds. Their natural instincts also directly tie into the way they communicate with each other. They are emotionally strong and serious minded but tend to suffer from “little man syndrome”, and aren’t afraid to show the bigger species that they aren’t afraid of them.

Ibirians are highly intelligent and can learn the languages of other cultures, but they are recently evolved species and still retain much more of the natural instincts of their ancestors then other sentients tend to. Their own language, Ibireese, is very complex and impossible for other races to learn. Their language is not only verbal, but also uses pheremones and body language. The pheremones given off by Ibirians when interacting with one another add a lot to the conversation. Only Iberians can fully sense these pheremones.

Ibiran language includes, but is not limited to...

Gender can be important to the Ibirian culture, as in most Iberian religions, only females are allowed to be priests. Females are also highly respected due to the fact that they create new life and are seen as being more closely tied to the Sun Goddess. In some religions, it is custom for males to give small gifts to females as a token of respect.

Female Iberians have wider hips. They also have breasts, but they aren’t really seen as sexual organs. Fur covers up the nipples. The genitals of an Ibirian male are animal-like. They do have a sheath that comes out when sexually aroused.

Females go into “heat” between the winter months and early spring months. Females can control their sexual urges during this period, but they do desire sexual activity during this period. The actual act of mating isn’t much different then sex among humans. They can have sex at any time of the year, but can only breed during this time. The gestation period for females is 5 months and usually only one child is born at a time. However, twins and triplets are common.

Ibirians can contract a form of canine brucellosis, which can also spread through contact with saliva. This can be cured and treated with modern medical technology. Do other sentient species in the Azure Wheel universe can get this disease.

About 65% of all ibirians follow the Ibiaar religion, which is the only religion native to their species. The other 45% of Ibirians follow religions from other cultures or are Agnostic. They are a highly religious species and only a very small percentage of Ibirians (About 2%) are atheistic.

Ibiaar is the belief in the Sun Goddess (those silly offworlders refer to her as the Lifestream). They also believe that nature is sacred. The combination of the Sun Goddess and nature allow all life in the galaxy. Like in Daoism, there are various spirits found in nature. Every plant, animal, body of water, etc has a spirit that protects it.

According to the Ibiaar, Taraava, the first month in spring is a month of rejoicing. During this month, festivals are put on and there is gift giving and costume wearing. This is symbolic of life coming back to the world after winter.

Relationship with their Planet

They call their planet, "Mother forest" and consider their homeworld to be sacred ground. They are very careful not to damage the surface of their planet and did not build huge cities on it. When they gained space travel ability, they began building colonies on the two moons orbiting their planet to make sure that it would never be damaged.

Young women wishing to become Ibiarr priestesses must go on a spirit journey where they stay in the forests of Ibirus for three months, living off the land. When she returns, she becomes a full fledged priestess.

Ibirians are completely omniverous. They require protein, especially from meat and eggs but also enjoy fruits, nuts and berries. They can eat junk food, but will more often then not prefer healthy, natural foods. Meals are important to their culture and they tend to eat together in groups. To their ancestors, this was a way of protecting the pack from predators.

hey do have an unwritten law about killing animals for food - Animals are children of the Sun Goddess. If an animal is killed, it must be eaten. If killing an animal for food, do not allow it to suffer.

Guidelines for creating an Ibirian Character

Retrieved from "https://azurewheel.fandom.com/wiki/Ibirian?oldid=4800"
Community content is available under CC-BY-SA unless otherwise noted.