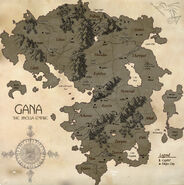 Gana, the Jincilla Empire.
Add a photo to this gallery

The denizens of Planet Telor. These reptavians are an 'undeveloped race' with a culture similar to our ancient Greeks or Romans.

While avian in appearance, the Jincilla had actually evolved from dromaeosaurs.

Their bodies are covered in dark grey feathers with white cheeks, throat, stomach and belly. The shape of their body is mostly humanoid with the exception os powerful digitigrade legs that end in three-toed clawed feet. The innermost toe being an upturned 'sickle claw' like a velociraptor. Protruding from the bottom of the spine is tail that resembles that of a dinosaur only slightly thinner and covered in feathers. Jincilla from the southern regions have raptor-like scales on their arms below the elbows.

The genitals of both genders are internal. Female Jincilla lack boobs, but are much smaller and more slender then males. If not for this and the wider hips of females, Jincilla would not be sexually dimorphic.

Jincilla faces vaguely resemble the head of an eagle only much more broad. Their powerful jaws end in a hard black beak that contunues in plated segments up to behind the forehead. Their eyes are piercing and catlike, always brown, green or gold in color depending on the region. From behind the crown of the head to the base of the beck is a mane of thin feathers the same color as the main body.

The best way to describe Jincilla culture would be to say that they are most like our ancient Romans, but have some Indian and Thai thrown in as well. Jincilla architecture resembles our Greco/Roman architecture, but is usually built into tall mountainsides. Their clothing and music have an Indian flair to them while their armor is based on Spartan armor (REAL Spartan armor, not the nonexistant armor from the movie 300).

This species is divided up into different independant states (or 'polis'), each one ruled by a king or caesar. This ruler is said to have a 'divine right' to rule over his people, that his family was placed in power by the gods themselves. The rest of Jincilla society usually consists of free people and slaves who are owned by free people.

Slaves are kept as laborers or sevants, but are usually well treated and even allowed to own property and purchase services and goods with their earned money in most polis.

Most free men serve in the military or make a living farming or crafting. Jincilla women are usually tied to domestic work such as weaving, making food and taking care of the home, but are still highly respected in the culture. Wealthy females will often throw extravagent parties to impress other members of society.

Some past time activities include going to the theatre or watching gladiatorial combat. Jincilla gladiators are armed combatants who are put up against other gladiators, wild animals, or condemned criminals for entertainment. They are celebrated as an art form by the Jincilla and gladiators that perform well are viewed as celebrities in their culture. The Jincilla also have their own version of the Olympic games.

Music and dancing are a big part of Jincilla culture, and this is often mixed with aerial acrobatics to create a beautiful and unique dance. Jincilla music is very close to Indian music.

Marriage in the Jincilla culture is different then what we consider marriage. While some do marry for love, marriage partners are mostly arranged through the parents and is usually a means of strengthening a family's political ties or wealth. Since citizenship and social status are inherited through parents, there are limits to one whom might marry. It would be considered 'taboo' for one to marry one of a different class or social structure.

The dowry is an important provision for females since they are usually not allowed to inherit their husband's property. It would have to be enough to provide for her in case of death or divorce but would be managed by the housekeeper.

Since most marriages are arranged, it is still allowed for both partners to have other relationships and even with coutesans and prostitutes. Many females will seek relations with gladiators and even buy the feathers or vials of sweat of famous gladiators.

Sex is somewhat ritualized for the Jincilla. Only the males are allowed to penetrate because it signifies their dominence and role in society.

Instead of laying eggs, females give birth to live young. Jincilla are born without feathers and are blind. Their eyes open within three weeks of birth and they can walk and talk within a year. However, it takes much longer for their wings to strengthen so they usually cannoy fly until they are between 5-8 years old.

Like in ancient Greece, homosexuality is just something that happens and isn't necessarily frowned upon. The Xoholo, a group of elite noble-warriors similar to the Hoplites are divided into pairs which are often (but not always) composed of homosexual couples.

Religion and the Lifestream

Rather then belief in the Lifestream, the Jincilla religion has a complex pantheon of over 25 Gods and Goddesses. Most Jincilla recognize all the major deities. There is an order of heirarchy to the deities under Xeul, the father of the gods. Xeul, however is not omnipotent. The gods act like mortals and even have mortal vices.

The Jincilla believe in an underworld, but a funeral must be performed on the deceased or they will never find their way and will haunt the planet as a ghost forever.

Each city has different temples set up to the different gods while the larger cities will often have pantheons, which are temples dedicated to every god. Each temple houses several nuns and/or monks. Larger temples will have at least one Oracle.

Oracles are females that would be considered sensitive to the lifestream by standards of all other cultures. The Jincilla believe that the words of the gods come from their mouths.

While the Jincilla's dinosaur ancestors were carnivorous, the Jincilla have evolved to be omnivores. Most Jincilla do prefer meat, but they also eat plant matter and dairy products.

Their cooking usually contains a lot of exotic spices.

Traditional Jincilla food includes a more humble version of the cheesecake which is savory rather then sweet and usually contains bits of meat or olives. The wealthy will also enjoy a form of custard that uses honey as a sweetener and various pastries and breads.

The Jincilla language is mostly based on our ancient Latin and Greek languages but will often use Indian syllables. Jincilla names should reflect this.

Retrieved from "https://azurewheel.fandom.com/wiki/Jincilla?oldid=4809"
Community content is available under CC-BY-SA unless otherwise noted.